We live in the age of hyperbole. A time when understatement seems to be a thing of the past. It’s no longer sufficient simply to say something was good. It has to be awesome or mindblowing. And if something is bad, it’s not just bad, it’s “literally the end of the world”. So, I’m fully aware that what I’m about to type may well be taken with hefty shovelfuls of salt. You’re going to assume I’m exaggerating. But I’m not. I promise.

Last week, I had an experience that was life changing. Literally.

And, yes, I am using that word correctly...

As we approached the launch of our crowdfunding campaign for our Satish Kumar Documentaries, I realised that I was missing out on a key part of the work he has spent his life engaged in – namely, Schumacher College. Satish was one of the key founders back in the 1990s. It was his original document of intention that set the template for how Schumacher has progressed ever since. Far more than just a college, Schumacher is a community, an idea, an ever-changing new paradigm in learning.

I have been meaning to do a short course at Schumacher ever since Fern came home after her first time there totally invigorated and inspired but the timing has never seemed right. But when Fern and I met with Satish at his home in Hartland in early February to discuss the documentaries, he happened to mention that Margaret Wheatley was coming to Schumacher in April to host a short course called 'Leaders as Warriors for the Human  Spirit'... and the die was cast. I had to be there.

You see, Margaret Wheatley, for those who have never heard of her, is a truly remarkable woman. Like Satish,  Meg is a teacher, an activist, a thinker, a philosopher. Her revolutionary work in the field of leadership and systems theory offers an entirely holistic and interconnected way of looking at our means of organising our world. Her seminal book, ‘Leadership and the New Science’, first published in 1992, brought together advances in quantum science, biology and chaos theory to show how hierarchical structures are actually contrary to natural systems and that chaos, interconnectedness and change are, in fact, the only route to transforming how we work together. A lifelong teacher and activist, since 1973, Meg has published eight books and worked as a consultant and speaker with every possible type of organisation:

"They range from the head of the U.S. Army to twelve year old Girl Scouts, from CEOs to small town ministers. This diversity includes Fortune 100 corporations, government agencies, healthcare institutions, foundations, public schools, colleges, major church denominations, professional associations, and monasteries. I have also been privileged to work on all continents (except Antarctica). These organizations and people are wrestling with a similar dilemma—how to maintain direction, integrity, motivation, and effectiveness as we cope with relentless turbulence and unending change in this very troubled world." Margaret Wheatley, bio.

Fern’s very first Schumacher course when she was Fellow for Wales on the Clore Leadership Program was with Meg Wheatley after having read ‘Leadership and the New Science’. The connections Meg’s work gave to Fern between holistic thinking, systems theory and leadership lead directly to the creation of Emergence – indeed, emergence as a theory of how things come into being sits at the heart of Meg’s work. Despite my desperate resistance to change, Fern’s insistence that I really should take note of this woman lead me to go to one of Meg’s seminars in Cardiff in 2014. And to say that I wasn’t disappointed would be a huge understatement... You can see the day for yourself  on artplayer. Or, alternatively, here's a brief taste of Meg recorded this past week at Schumacher.

Fern was right, as she so often is. Meg is, as our American cousins might say, 'the real deal'. I saw someone speaking candidly and openly about the genuine, unvarnished, un-spun problems we face as a race at this time on planet Earth. A time when we are stuck in old systems, desperate to change and yet desperate to stay the same, hurtling towards a terrible fate that we can clearly see yet find impossible to accept. Meg spoke with compassion and real understanding of the overwhelm so many of us feel at the crushing weight of the systems we live under, of the sense of lostness we feel, and of how we are reacting to that by redoubling our efforts to do the same things. As Einstein is famously supposed to have said, the definition of insanity is doing the same thing again and again and expecting a different outcome and yet here we are, propping up the failing capitalist economic growth system again and again, all while it continues to undermine and destroy the eco-systems that keep us alive.

What particularly struck me about Meg was that she doesn’t possess a trace of ‘guru-itis’ – she doesn’t insist that she has all the answers and that one must only ‘do it her way’ to be happy forever. On the contrary, Meg embraces doubt and uncertainty and thrives on the cut and thrust of questioning and open conversation. At the heart of everything she talks about is a deep and abiding faith that “humans can get through anything as long as we’re together”.

I must admit that I found that last notion impossible to reconcile myself to after a lifetime of cynicism and disappointment. However, when Satish said Meg was coming to Schumacher, the stars seemed to have aligned and I signed up like a shot.

So, how was the course?

I’m not going to tell you. Not because I want to deprive you of the life changing experiences I had there but because, frankly, I’m unable to put it into words that would even come close to encompassing it.

I will say that I sat with Meg and fourteen fellow humans from all walks of life in the beautiful surroundings of the Dartington Estate and we shared ourselves with openness, compassion, grace and love. We talked of our struggles to find sustenance and energy at this difficult time in the world. We spoke of feeling lost and exhausted. We spoke of our doubts and fears that we were doing the right work – work that might be of service to others and to ourselves. We spoke of warriorship – not destructive, aggressive actions against others but of being brave, of staying, of seeing it through and being there for each other, fully aware of the pain and suffering around us and not wanting to add to it. And we spoke of the impermanence of life – the divine beauty in the small moments of joy and sadness, the blossom and the birdsong and the wind in the trees.

Oh, and we laughed. My God, how we laughed. Such delight in each other’s company. I can’t tell you... In the midst of some of the darkest ideas that Meg challenged us with – letting go of believing we can change the world, giving up on relying on hope to get us through – the humour and warmth of the group made it all okay. We laughed till we cried. The range of Meg Wheatley T-shirts may not be global bestsellers but they certainly made us chuckle... my personal favourite being a simple ‘Meg Says No’. Close runners up: ‘The Pope of No Hope’ & ‘We’re All Going To Die’.

I guess you had to be there... I certainly did. I needed to be there. I couldn’t have been anywhere else. It literally changed my life. Literally. I am not the same person as I type this today that I was before I went to Schumacher.

By the end of the week, with tears in my eyes, I was able to say, hand on heart, I do truly believe one of Meg’s key maxims for Warriors for the Human Spirit – the one I found impossible to reconcile myself to last year:

“Our actions embody our confidence that humans can get through anything as long as we’re together.”

I believe it now. I really do. Because I feel it in my bones. And it doesn’t mean it’s easy. It’s a daily practice to be compassionate and open and understanding of each other. But I know that it’s the only thing that makes life bearable. To be together, truly together, with our fellow creatures – human and otherwise – on this small, fragile blue ball we call home. It’s the only thing that matters.

That is one hell of a college...

Towards the end of the week we headed down to see Satish at The Old Postern on the Dartington Estate where Schumacher College has been based for a quarter of a century. Our course was in the Elmhirst Centre at Dartington Hall, a sign of the burgeoning health of Schumacher as it bursts its seams with so many people wanting to be part of its optimism and paradigm-shifting courses.

In the warm sunshine, Meg and Satish greeted each other as the old friends they are – and two halves of my world became whole.

Schumacher College is a remarkable place. You should go if you can.

I recommend Meg Wheatley and her work to you without reservation. Her book, ‘So Far From Home: lost and found in our brave new world’ is an incredibly tough but vital work. On the course we lovingly referred to it as Meg’s ‘Dark Book’ and we laughed. It won’t make you laugh... but it could very well change your life... 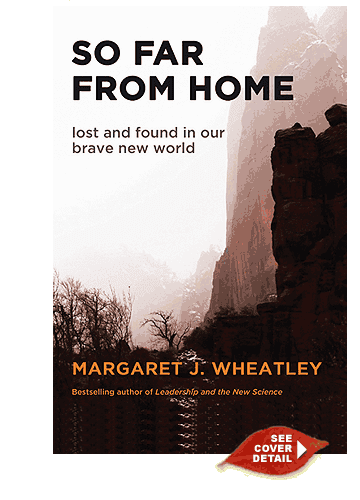 I leave the last words to Meg in one of her favourite quotes. And I send it out to my fellow warriors, now all back in their lives, wondering, like me, if any of that was real.

It was, my friends, it was.

I forget the rest.