COP 1, 2 & 3 - From Paris to Swansea by guest blogger Phoebe Gauntlett

It’s well known that there’s a block in many people’s minds when it comes to discussing climate change, and the impact we’re having as a species on the planet we call home. It’s a difficult notion to deal with - that unequivocally we are causing such destruction in so many ways. I am well aware that I mostly go about my day living a life that is contributing to this destruction, and as this is something I have to deal with every day, I have to put my hands up and say I do push it to the back of my mind and carry on. This is the case for most people, and is a hard burden to live with.

The space created by COP3 I believe to be incomparable in the way that it allowed for those often suppressed emotions and fears to be brought out, explored and supported in a caring and trusting environment. The day led the thirty or so attendees through an emotional spiral. It was more than a film about climate change, and more than a discussion session and film about climate change.

Initially, it gave people the time to settle into the room and connect with each other, getting to know the space and letting the fast pace of life calm a little. The focus of the day was then brought in, alongside everyone’s shared fears around this often disregarded topic. The One-Eyed Man very effectively brought these fears into the light in the form of the charismatic and passionate voice of Phil Ralph, who says everything we’re often all too afraid to think and say ourselves, and a whole lot more. At this point there was quite an agitated energy in the air, the effect of a bunch of people in a room with climate change on the forefront of their minds - buzzing with awareness, intrepidity, and spirit.

The film carried this energy to another level, a mixed bag of emotions for my part – shock and anger laying alongside hope. This Changes Everything is a horror story in many ways, speaking openly and bluntly about the impact of climate change around the world, and how many lives and how much of the land it has destroyed, and will do in the future - bringing into reality all our fears. It goes on however, to tell the story of cases around the world where people have stood up against the destruction, have fought for themselves and for the land around them, and have WON. A much more uplifting message contained in the end.

Nonetheless, the impact of the main message of the film, the destruction, left a firmer imprint on me, and I believe others too, and left me feeling that sense of hopelessness and despair I’m so familiar with. This is why COP3 didn’t conclude with the end of the film. The recognition of these feelings is of such importance, and having the time and space to express this and to form it into positive energy, imperative to it not consuming you. After the film, time was given to express those passions through the use of word, colour, images; whatever medium each person connected with, and space was given for each person to speak freely about how the film touched them. We let it all out. 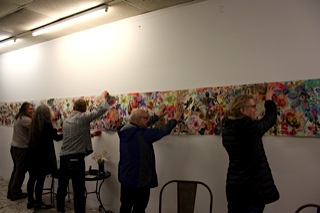 After this, action was at the forefront; discussions on projects, initiatives, and organisations working to improve things and inspire change. People dedicating their time and lives to creating the change we want to see in the world, and opportunities and ways people can get involved. Any action, no matter how big or small, contributes to this movement. 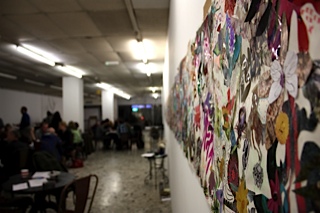 This knowledge that people are taking matters into their own hands, and that there are so many inspiring stories to hear, took precedence over the feelings of despair; the energy in the room had moved to a different place, one full of vigour, motivation and strength. 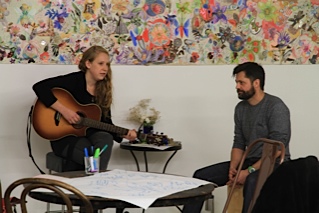 All in all, I feel that the COP Swansea events were an incredible shout out to Paris and COP21 from the people of Swansea, especially as it allowed people who might have wanted to be in Paris for the climate summit to show their support at home. For me, it was also refreshing to be able to express my emotions on the subject, which at that time were particularly prevalent due to what was happening in Paris. COP3 created a space in which I could connect with my feelings alongside others, and move through them as a collective in a supportive environment, to a place of hope.

About Phoebe - "'I'm a London-bred country bumpkin with a passion for all things green and eco. I involve myself with the arts and environmental scene of Swansea as much as I can, as I fell in love with Swansea when I moved here a couple of years ago, and it very quickly became home."