“They always say time changes things, but you actually have to change them yourself.” – Andy Warhol

Paris next stop! I’d decided to go to Paris, to take part in the demos putting pressure on negotiators at COP21 to make an agreement that would stop climate change, back in the summer. I’d already booked a train to go to Paris and a hostel to stay in through Friends of the Earth as well as hotel accommodation in London en route. With the terrible Paris attacks having happened I went through some tense weeks questioning the risks taking part in demonstrations and checking what demos if at all were going ahead. I even signed a campaign to the mayor to allow outside demos about climate change despite the city being on high security. I had met Alison, a Swansea member of Greenpeace, who said she was still keen to go. We planned to meet in Paris.

I was relieved to find that Friends of the Earth successfully regrouped with some organisations and had concrete plans for a networking event and public demonstration within the security restrictions. I was keen to join in the 350 degrees Red Lines demonstration. I had some reservations, especially in the face of a police force in Paris that were understandably rattled by terrorism.

Arriving at Gare Du Nord on the early Eurostar from St Pancras we were escorted to our hostel not far from the Canal St Martin. If I was to take part in the Red Lines demo I was to attend an induction event starting an hour after my arrival. I briefly chatted in the hostel foyer with someone called Lucy who was considering going. We joined forces in a mad dash across Paris to the Z.A.C. (Zone d’Action Climat) for the induction. There was a touch of serendipity as Lucy turned out to be a friend of Fern’s from Emergence in Swansea.

The headquarters of the Coalition Climat 21 at Z.A.C. was set up to serve as a place where people in Paris could attend screenings, participate in discussions or discover art exhibitions about climatic disruption. The Z.A.C. was intended as a place to increase the rhythm of the mobilisations: with preparations for symbolic actions and artistic happenings and a media centre as a working space for journalists. Coalition Climat 21 was a response to the failure of the 2009 Copenhagen conference and the hijacking of the 2013 Warsaw conference by industry interests (which led NGOs to walk out). It brings together 130 organisations from social movements, religious and international solidarity, environment and human rights. All affirm that the COP21 negotiations, though necessary, are not enough to combat climate disruption and it’s resulting inequalities. The objective therefore, was to capitalize on the political and media exposure of COP21 launching a strong and sustainable movement for climate justice.

The Red Lines plan was to walk in pairs towards the Champs Elysee. When horns sounded we would step off the pavement onto the road heading towards La Defense; the financial district. We were assured, perhaps naively, we would be in relative control and could withdraw from the protest if things became tense or violent. Lucy was already suitably paired up so I had the slight embarrassment of “speed dating” for a buddy to walk with. I paired up with Sam from Sussex.

Lucy invited me to a presentation by ArtCOP21 at an old theatre. ArtCOP21 was set up to challenge the idea that climate change is seen through policy or a scientific lens, and that solutions are discussed in political offices, boardrooms and negotiating halls. They believe that climate is culture and that active engagement of citizens worldwide is needed to transition away from fossil fuels towards a greener sustainable future economy.  ArtCOP21 has established an amazing global climate festival of over 550 major events.

What moved me was a personal account by a Philippine artist and activist. He spoke of the devastation caused by a typhoon on his city, the looting that followed and clearly communicated the emotional costs to him.

Next we headed to Jardin D’Alice, an office building being used as an experimental social and ecological laboratory. For a small entrance fee we were treated to a meal of curried brussel sprouts and rice. The building was packed with artistic and political activity. An impressive area was being used as a studio to make banners, posters and sculptures. Art materials and tools were available. Lucy helped paint banners and I was inspired to do a banner ready for the demo the following day.

In my artistic enthusiasm in such a busy space I lost Lucy so went on to the nearby Palais de Congres where Friends of the Earth had been explaining the plans for the next day. I’d missed the main activity and a small party was in swing. Tired after an exciting day I headed back to the hostel and to bed.

Catching up with Alison over breakfast we decided to walk to the Red Lines demo at Arche de Triomphe and meet up with my buddy Sam. Passing through Place de Republique we were moved by the many tributes to those lost in the recent tragedy.

Further south we stopped for coffee close to Le Carillon restaurant; scene of some of the worst of the shootings its glass shattered with bullets. It felt surreal. My thoughts turned to the dead and their families and those around the world who have also suffered at the hands of terrorists.

The walk through the wonderful Paris streetscape in the sunshine was an antidote.  You could not help but be aware of the COP21 talks with posters, adverts, graffiti, signs, art and sculptures everywhere. We spotted Caroline Lucas from the Green Party at a security check at the demo start and I managed to shake her hand. Meeting Sam we were relieved to hear that the demo was now declared legal. 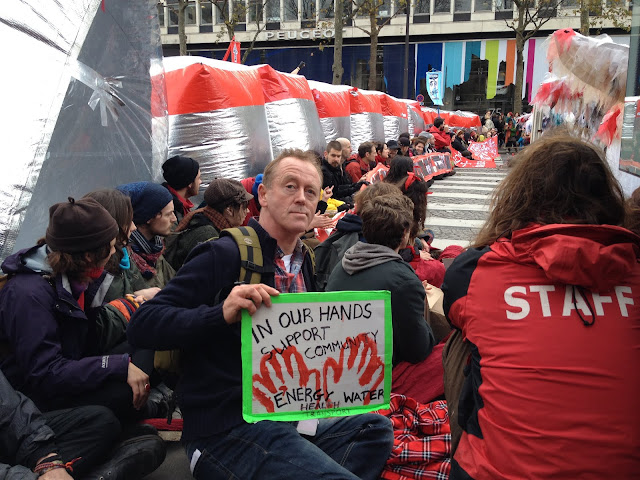 The demo was diverse, with a brilliant vibe of collectivity, independence, focus and creativity. It was truly mesmerizing! Horns sounded and we paused remembering those affected by war, terror and climate change. Then a further horn sound and the demo began. Red was everywhere: on people’s clothing including quirky costumes and in the red flowers and umbrellas carried by activists. Very striking were the huge lengths of red cloth held above people heads down the length of the street and waved up and down to the myriad rhythms of bands, singing and chanting. There was a carnival atmosphere and we headed back and forth up and down the Champs Elysee. The police blocked the way to La Defense and every side street. The activists represented many causes with climate justice being the most prominent. Somehow we remained peaceful and even joyful. Most exciting were the huge inflatable red and silver cubes originally planned to serve as a barrier against any police counter activity. These became playthings, banded up and down the street over our heads.

COP21 Paris – D12 demonstrations/actions/mobilisations:
Short clips from some of the many actions, meetings and demonstrations that took place during the last two days of COP21, the climate summit in Paris by Sam Milford

After lunch we gathered underneath the Eifel Tower for another rally. There was a peaceful sit down protest. The police had split the area by the tower into three zones so no large gathering was possible. We followed a Mexican band of demonstrators to the final zone next to the stage where Naomi Klein gave an inspirational speech about the planned fight in 2016 to keep fossil fuels in the ground. I think we calculated we walked about 12 miles that day and what a day!

The demos left me inspired and energized. What stood out for me was the positive energy and humanity of the people from around the world united in that one street.

Humanity is defined in The Collins English Dictionary as “the quality of being human” and “kindness or mercy”. It is further defined as charity, compassion, understanding, sympathy, mercy, tolerance, tenderness, philanthropy, benevolence, fellow feeling, benignity, brotherly love, kind-heartedness. Maybe brotherly love would better read as respect for one another.

The great success in Paris was the connectedness represented there that day. A question for the future is how we build even better connections with each other locally and globally to combat climate change. By the Eifell Tower a student from Portugal interviewed us for her research asking how we felt about climate change. I was able to answer I felt positive. Naomi Klein declared “we are nature”. I agree we need to rekindle our spiritual link to each other, the planet and nature. We must accept responsibility for causing climate change and accentuate and celebrate the positive qualities of humanity. We must question capitalism and find a new model of economics and of living respectfully together that doesn’t damage our humanity or the planet irrevocably.

As the activists sang on the day: “Changeons le system pas de climat.” Change the system, not the climate.

“There is still much to do but we now have the means, the intent and the hope. In the days, weeks, months and years ahead art, culture and imagination will continue to play their part, helping us to bridge the gap between what we know, and we know we must do. We can see that another world is possible. We have only to choose to create it.” – Bill Mc Kibben