Phil and I have spent some time reflecting on our first year at The Barn, our home and micro retreat centre in the hills of mid Wales with a river running through it… 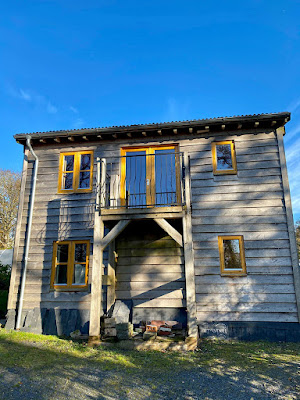 We’ve been asking ourselves - what is the ‘right work’ to do during these, the strangest of days?

What is a useful act of relevance, an act of efficacy, an act with meaning, an act of worth?

If we ‘make art’ in response to or in service of these times, then  – what kind of art do we make?

We’ve been trusting, that doing things ‘at scale’ is not currently in our compass. By scale, we mean large scale. We’ve been digging deep not digging wide. We’ve been working at a human scale and we have created a small space of sanctuary and creativity here at The Barn.

People have come and gone in search of rest, recovery and rejuvenation at The Barn, including the Medical Director of a Hospice, a Vet, and a Counsellor who works with ‘at risk’ young people.

We ‘ve facilitated 6 ‘Way of Councils’ on White Privilege for around 50 people online.

Whilst Phil has been busy in his other job, writing screenplays (Casualty, Doctors and a new documentary for Netflix),

I have been the celebrant for a funeral for 1 man previously unknown to me though we both shared a birthday, 28th May.

I have lead a RitualArtworK with and for 5 young Cornish based performers curating a walking workshop along the South West Coastal Path to mark the end of a 9-month creative process.

This season, I’ve also spent a lot of time doing the work needed to look after a piece of land, learning about growing vegetables, with some success. We grew a lot of blackcurrants, squashes, cucumbers, celery, beetroot, chard, kale, broad beans, runner beans and salad crops. Phil and I have fed ourselves and a few others on the fruits of our labours.

In these times of post-COP26

In these times of a world-wide pandemic

In these times of border restrictions and withdrawal of sanctuary

I am currently working on an ‘art project’ with Suzi Gablik - artist, writer, art critic, activist, speaker, friend. The project involves reading and recording her final published book, the closest she has written to an autobiography: ‘Living the Magical Life: An Oracular Adventure’. The recordings are then burnt onto disc and posted to Suzi’s home address in Blacksburg, Virginia in the U.S. Suzi has been a great mentor and inspiration to myself and so many artists and activists whose life and work has been changed, shaped and directed by her writings. The books in order read like a history of the development of ecological art activism in the 20th century, each pushing the boundaries more than the last.

The Re-enchantment of Art

Conversations Before the End of Time