A Tale of Two Conferences by Anna Pigott

In 2012 I went to two very different conferences.  (I know this doesn't sound like the beginning of an interesting blog post but please bear with me..)

The first conference, a huge international gathering in London called 'Planet Under Pressure – New Knowledge Towards Solutions', focussed on the idea of the Anthropocene, a concept which describes the enormous influence that humanity now has on Earth. The conference left me feeling both overwhelmed by the enormity of what the Anthropocene sets out (what can I possibly DO?!) and underwhelmed by the proposed 'new knowledge'.  Over 3000 delegates attending an array of workshops during the conference were churning out this knowledge but … where was it going, and how could it all be joined up to produce the changes that were needed?  Something was missing, but I couldn't put my finger on what.

Later in the year, that something hit me between the eyes (quite literally, as I danced around a mini exploding volcano made of sand. As I said, this one was different): At the Emergence Summit in September 2012 it became joyfully apparent that there is something that connects all the problems of the Anthropocene – it is us, it is culture and, as Paul Allen has said, it is the stories that we tell ourselves about where we've come from and where we are going.  From our culture and values everything else flows, with no 'behaviour change programs' in sight. 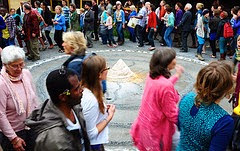 So, my question became 'how does culture change?', and this led to my current PhD research at Swansea University.  By my desk I have pinned a quote by the Welsh academic and novelist Raymond Williams which I think sums it up beautifully: “Culture is ordinary. That is where we must start.”  It is easy to take for granted the everydayness of our culture, so much so that it is often difficult to step back and see what shapes it.  I think the role of art is both taken for granted and seen as a 'luxury add-on' in this sense.   What Emergence has shown me is that art is much more than something that is just 'done to us' (or for us).  Being an 'artist' shouldn't be a title reserved for those who do it in exchange for money.  If we cook, if we garden, if we fix things, if we think and imagine, if we talk, if we play – we are being creative, we are artful.  This is how art and creativity make – and change – culture.  As Bertolt Brecht said “art is not a mirror held up to reality, but a hammer with which to shape it”.

I have become especially interested in how 'meta-narratives' can influence cultural change. For example, sociologist Zygmunt Bauman has described how the Industrial Revolution in western societies was underpinned by a narrative of aspiration and progress in which people self-identified as pilgrims on a long journey of collective endeavour for a better world.  These days this narrative has collapsed under conditions of environmental crisis, uncertainty and perpetual change, such that people behave more as tourists than as pilgrims, snatching at fleeting experiences rather than committing to shaky long-term aspirations.  Our problem now, Bauman argues, is that we can't imagine a better world, let alone aspire to one.

Being on somewhat of a journey of discovery myself, Satish Kumar's activism is quite new to me, and I have been struck to find that he, too, advocates a 'pilgrim' approach, and also advises on how to do it.  He passionately and enthusiastically urges us to slow down and to take care of ourselves, a prerequisite of taking care of the Earth.  He also calls for a more holistic view ('soil, soul, society') which recognises our membership of an Earth community, not just a human one.   This brings me back to the concept of the Anthropocene and reminds me of philosopher Donna Haraway's suggestion of replacing 'Anthropocene'  – a term which puts humans centre stage – with the (albeit unpronounceable) 'Cthulhucene', a term which describes the tying together of human and non-human ecologies in a kind of 'responsible symbiosis', an approach which might better sustain us in, as she says, “staying with the trouble on Terra”. 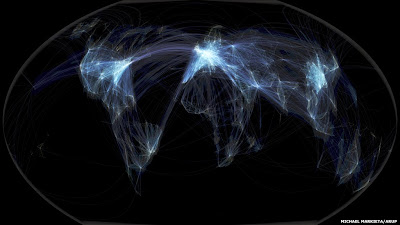 Staying with the troubles on Earth and finding ways to transform them is likely to be a long pilgrimage, and whether we choose to embark on it will depend on whether we have the appropriate stories, visions and creativity to sustain and inspire us along the way.  In Wales, some examples of such visions include the One Wales One Planet manifesto initiated by Jane Davidson, which led recently to the Welsh Government's pioneering Well-Being of FutureGenerations Act, and CAT's Zero Carbon Britain Project which Paul Allen outlined in his previous blog post. Satish's meetings with Jane Davidson promise to be an exciting opportunity to explore and ignite conversations that are just beginning in Wales, and elsewhere, about where we've come from and where we want to go.  And although I can't wait to listen to them, wait I will have to, as all pilgrims must…

Emergence is crowd funding to make a Landmark Series of documentary films of Satish Kumar in conversation with Jane Davidson. Click this link to find out more and help make this legacy project happen.

Anna Pigott is a PhD student at Swansea University, researching how visions of the future are created and represented in Wales and how they relate to social and political change.