It began, as so many things do, with four little words:

I was sitting next to my partner, Fern Smith, in a big top in a field in the summer of 2014. We had just heard Satish Kumar speaking to the Resurgence Summer Gathering and were both quietly processing and coming down from the remarkable sensation of being carried by Satish’s words and thoughts. If you’ve never had the opportunity to hear him speak, all I can tell you is that speech is his art-form. He weaves ideas, images and ideals into a tapestry that can lift you from gloom to elation in a matter of moments. Satish has been speaking to crowds of people since he became a Jain monk at the age of nine some seventy years ago. It’s fair to say, he’s an incredible speaker.

Fern’s idea was simple and brilliant, as her ideas invariably are. Wouldn’t it be great, she posited, if more people could have the opportunity to hear Satish speak, to share in his wisdom and learning and to immerse themselves in the lifetime of change and optimism that he communicates? Wouldn’t it be great if someone made a documentary series that captured Satish at the height of his powers and experience? As I nodded enthusiastically, it became terribly apparent that Fern was suggesting that WE should be the ones to make this documentary series – which would be fine if we had any experience or background in that kind of thing... but we don’t. Still, that’s never stopped us before so we immediately set off across the field to ask Satish what he thought...

I should contextualise this story by saying that, without hyperbole, I am the least likely person to be sitting in that big top on that day, listening to Satish speak. I don’t like change. In fact, not to put too fine a point on this, it scares me to death. I have lived most of my adult life as a dyed-in-the-wool cynic/atheist/realist/professional grumpy person. The running joke in my house is that all I really want in life is a pastry-based food item and a DVD box set. But the truth is that, in the last few years, the scales have really fallen from my eyes. All the values and goals I believed to be important have been revealed to be nothing but empty falsehoods. The ‘real world’ and ‘normal life’ now seem to me to be insane aberrations. The total and utter lunacy of living on our planet, abusing and burning through its precious resources as if we had three Earths at our disposal instead of one; the fact that none of this insane production and consumption appears to be making anyone (not even the stupendously wealthy) actually happy or contented; the fact that we are becoming more and more alienated from one another at a time when we really need to be working together – all of this hit me like a hammer blow as I approached my late thirties and, ever since, try as I might, I cannot make myself fit comfortably into the world anymore. I feel as if I am standing over an ever widening crevasse being torn apart, desperately trying to keep a foot in both camps. I feel vulnerable, afraid, doubtful, angry, bitter and terrified most of the time.

In 2011, in response to this new perspective, after twenty years of working as an actor and a writer, I began a series of performance experiments under the title ‘The One Eyed Man’. A kind of modern day Western shamanism, The One Eyed Man allows me to channel and focus these feelings and offer them as a pressure valve for myself and my audiences. I get up, without a clue what I’m going to say, and speak from the heart. Foolhardy? Definitely. Scary? Oh, you betcha... But in openly offering my feelings of doubt and vulnerability time and again, I came to understand that I am not actually alone. More and more people told me that they felt the same but they couldn’t articulate it – least of all to themselves, never mind to anyone else. It was the One Eyed Man that had brought me to that big top in that field on that day as I, alongside Fern, was giving a series of offerings from Emergence as part of the Resurgence Summer Gathering. I was due to speak the following day and, it’s fair to say that after seeing Satish speak so effortlessly, I was utterly petrified.

To go back to Fern’s idea and the four little words – she and I have long shared a love of a series of interviews with Joseph Campbell called The Power of Myth. Shot in California in the last years of Campbell’s life, he sits in deep conversation with the respected US commentator Bill Moyers over six hour long programmes and with joy, passion and enormous knowledge, he shares his lifetime of learning about mythology – its role in ancient culture and the value it brings to our lives today. Fern and I have come back to this series again and again. Each time we watch it, we learn more – about mythology, Campbell and ourselves. This series is the primary inspiration for the series we want to make with Satish. It captures Campbell at the height of his powers and learning and is truly a legacy to be cherished. We hope that our films with Satish will have the same impact.

We nervously put the idea to Satish. Nervous not because he is unapproachable or pompous – on the contrary, Satish is perhaps the most open and generous hearted person I’ve ever met – but because who the hell were we to be asking him this? But he listened, he understood, he nodded and he agreed – we could go ahead and put the project together. In the months since we have met Satish several times to talk about the films, discussing where we will shoot them and what we will talk about.

The question of who should sit with Satish in deep conversation as Moyers had done with Campbell was already in Fern’s mind when she whispered her four little words. Earlier that day we had heard Jane Davidson speaking to the Resurgence gathering. Jane is an equally remarkable person who comes at the same issues of sustainability, ecology and well-being from a totally different direction to Satish.

Jane is the former Minister for the Environment and Sustainability in the Welsh Assembly and was responsible for placing sustainability at the heart of Welsh Government policy in the One Planet One Wales Bill (now the Well-Being of Future Generations Bill) – the first government in the world to do so.  She also instigated the National Coast Path of Wales and brought in the law to charge for plastic carrier bags. She is now the director of INSPIRE - Institute for Sustainability Practice, Innovation and Resource Effectiveness at the University of Wales Trinity St David. She is a pioneer and a passionate speaker and debater. We knew that she was the perfect person to interview Satish for our series – someone who would interrogate and investigate Satish’s philosophies and ideas, drawing out themes and practicalities, making them relevant and useful to whole new generations in years to come. So... we asked Jane if she would be interested and she readily agreed. Months later we managed to get the two of them together at Schumacher College and almost had to hold them back, so keen were they to get started... 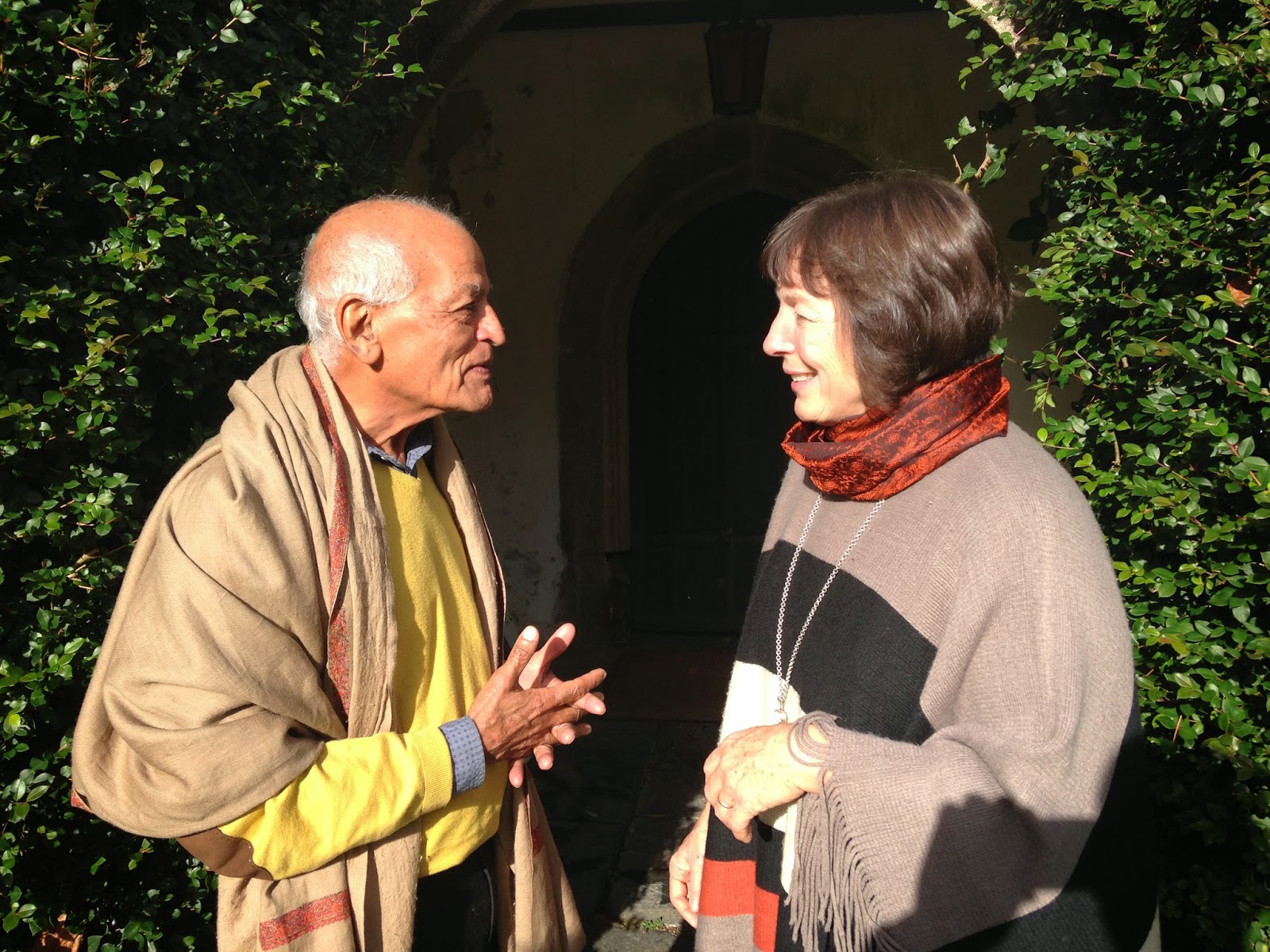 So, from Fern’s four little words sprung a whole new project for Emergence – and a whole new experience for the two of us. And I’m struck again as I write this by the power those words have and how they sit behind so much in the world that is good and valuable. The power of ideas, inspiration and synchronicity can and do change the world for the better. I know from deeply personal experience that ideas are scary things to submit oneself to. We never know where they will take us, how we will cope or what the outcome will be. Satish has lived his life by this philosophy – the philosophy of Emergence. In his twenties, he and a friend walked 8,000 miles from India to the United States without a penny in their pockets, carrying only a message of peace. They trusted in the universe and the kindness of strangers to get them there. All because Satish had an idea. 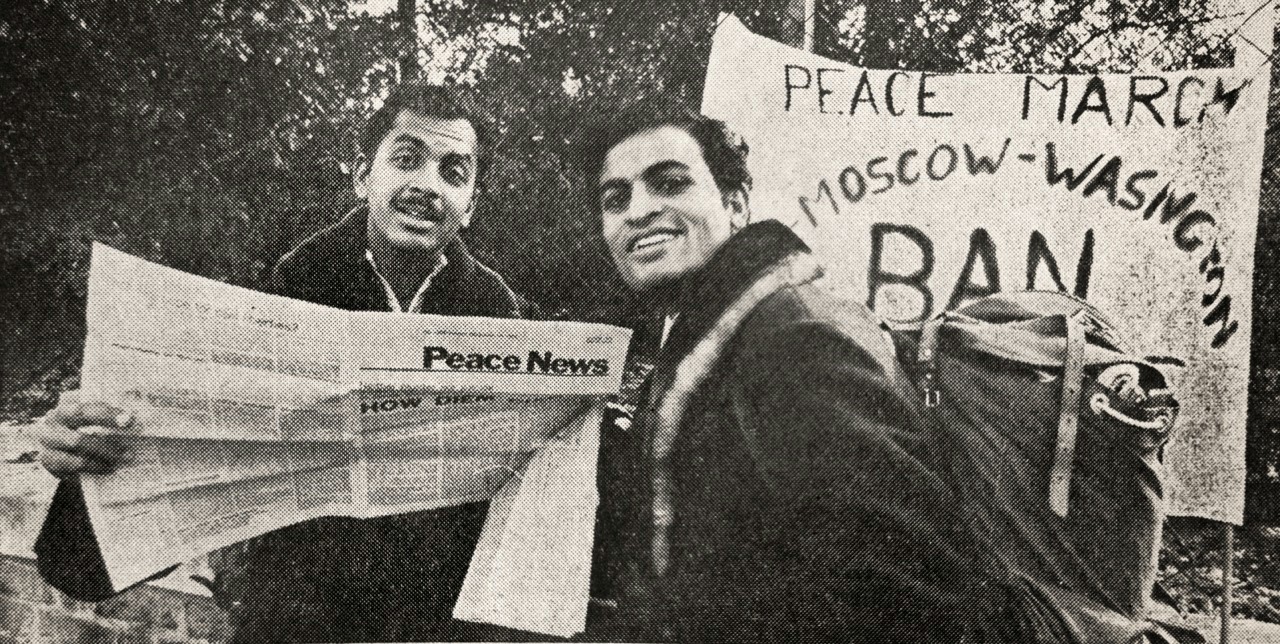 We are taking this philosophy to heart and will be crowdfunding to raise the money to make, produce and distribute the documentary series in a few weeks time. This too is scary and nerve wracking. We don’t know if we will reach our target. We don’t know the outcome of our actions. But we know we are following our hearts and making something that is an absolute good in a time of chaos, despair and bitterness. We hope that people will join us and help us make this happen. We trust in the universe and the kindness of strangers. And we trust in the power of an idea.

The following day, after the first steps towards Fern’s idea had been set in motion, I stood in the same big top where Satish and Jane had spoken so eloquently. I did not know what I was going to say. I did not know how I had ended up there. I was utterly terrified. But I trusted that something bigger than myself had brought me there... and I opened my mouth and I spoke.

I spoke about fear, doubt, uncertainty, anger, bitterness, emptiness and loss. I also spoke about openness, vulnerability, strength, compassion and community. And as I looked at the faces around me – which included my partner Fern and Satish Kumar (and believe me, if you want to feel adrenalin, try speaking off the cuff in front of one of the world’s greatest living public speakers...) – I saw understanding, warmth, delight and joy. I saw that ideas lead to change – and change is scary, terrifying even, but it’s what life is about. Standing on the cliff and stepping off and knowing, knowing in your bones, that the universe is there to catch you.

That is an incredibly powerful four little words...